Posted on August 24, 2020 by heidihornbacher

I have always been a car girl. In my childhood bedroom there was nary a Barbie or baby doll in sight, but I had a killer collection of Hot Wheels. As an adult, I consider the 1965 AC Shelby Cobra the holy grail of collectible sports cars. A blue one with white stripes is on my someday-maybe dream list. So I knew I would love Ford v Ferrari for the cars alone. The thrum of the engines had me grinning from the opening credits. However, under all the high-octane fun, there is a well structured script—a titanium chassis, if you will.

We ask our writers: in what way is your character desperate at the start of the story? In this film every character starts Act One desperate in some way. Legendary driver and designer Carroll Shelby is forced to retire after a heart attack, and is on the edge of suffering another at any moment. Genius but “difficult” driver Ken Miles is barely paying the bills when the IRS shuts down his auto shop to collect back taxes. Henry Ford II is desperate to turn around Ford’s decline. Lee Iacocca is desperate to impress Henry and keep his job. 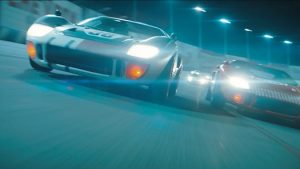 The stakes are high for everyone and that creates strong narrative momentum that opens the throttle on this story. The characters’ needs and wants all collide in a beautifully messy, fast-paced script. Its beating heart is the relationship between Shelby and Miles. Throughout the story, the characters consistently make high-stakes decisions, from which there is no turning back. At one point Shelby bets his whole company on Miles winning a huge race. Not only does this have us leaning forward for the whole race, it shows an important development in the internal relationship between the characters; a moment when one chooses to trust the other no matter what.

Of course, Ford v Ferrari is based on a true story, so there is the additional challenge of picking the right elements and being able to let go of “what really happened.” Did Shelby really bet the company on Miles’ ability? I don’t know, and ultimately I don’t care. It was a great choice in the service of increasing the stakes and accelerating the narrative momentum. It made me care more deeply about these characters. In another moment, Miles is left off the team he expected to lead, and listens to the race from home. In real life, Miles was on the team, but forced to share the drive with also-legendary Bruce McLaren. For the movie, leaving Miles at home was a much stronger choice. It breaks our hearts, and makes us root for him all the more in the next sequence. Sometimes the literal truth has to take a back seat to the most effective way of telling the emotional truth of a story.

So I ask you: How is your character desperate at the start of your story? The best answer will create high stakes for your character, whether internal or external. Or ideally, both.